For about a year after college I worked as a dishwasher in the nicest restaurant in Charlottesville, VA, the C&O. I was a pretty bad dishwasher, honestly, because I was too detail-oriented and therefore slow. I had to make sure each dish was perfect! Generally a bad plan for a busy kitchen. I mostly worked the slow nights.

However, the one big upside was that I was tasked with making the potatoes. I have carried this skill with me, and every year I make at least one batch, usually for Thanksgiving. They are still on the dinner menu as “gruyere-thyme smashed potatoes”, accompanying the Steak Chinoise, which was the most popular dish when I worked there 20 years ago. I bet it still is.

This is how I make C&O potatoes. (This post has nothing to do with data.)

I usually use 10 pounds of red potatoes. You can use other types of potatoes but since they’re not peeled (who has time for that?), the red potatoes look better and I think the skins add some earthy flavor. I bet Yukons would work well too. This will feed 20 people, easily, so scale back if you’re doing a smaller thing.

I dump the potatoes in a large stock pot and fill it with cold water. Dumping this many potatoes into boiling water would be splashy-burny, so just start with them in the cold water. Put it on the burner turned up high. It takes at least 30 minutes for them to cook through. You know they’re done when you can stick a fork in them easily. You can’t really overcook them though, so don’t sweat it.

While the potatoes are boiling, peel and press a bunch of garlic. I usually do about 5 or 6 cloves, but you can do more or less depending on how garlicky you like it. Also medium chop 3 or 4 regular yellow onions. Throw 3 sticks of butter in a sauce pan, melt the butter, then add the garlic and onion, season with salt (pepper comes later). Cook on medium heat, stirring every few minutes, until the onion is glassy and the mixture looks like a heart attack waiting to happen. That’s what you want. It should take about 15 or 20 minutes. If the potatoes need more time, turn the butter/onions/garlic down to a simmer since you don’t want the butter to solidify.

While the potatoes and butter/onions/garlic cook, grate the cheese. In addition to Gruyere I usually also use Emmental, a swiss cheese. You want to mostly fill a medium bowl with grated cheese.

When the potatoes are done, drain them and put them back in the pot. Then pour the butter/onions/garlic mixture into the pot, and add everything else that makes these things awesome: the grated cheese, at least a pint of heavy whipping cream, a few big spoonfuls of sour cream, and more butter if you like. Also season well with salt and white pepper (black pepper is visually less appealing, but I’m sure would work) and add a bunch of dried thyme. Churn it all up with a potato masher. 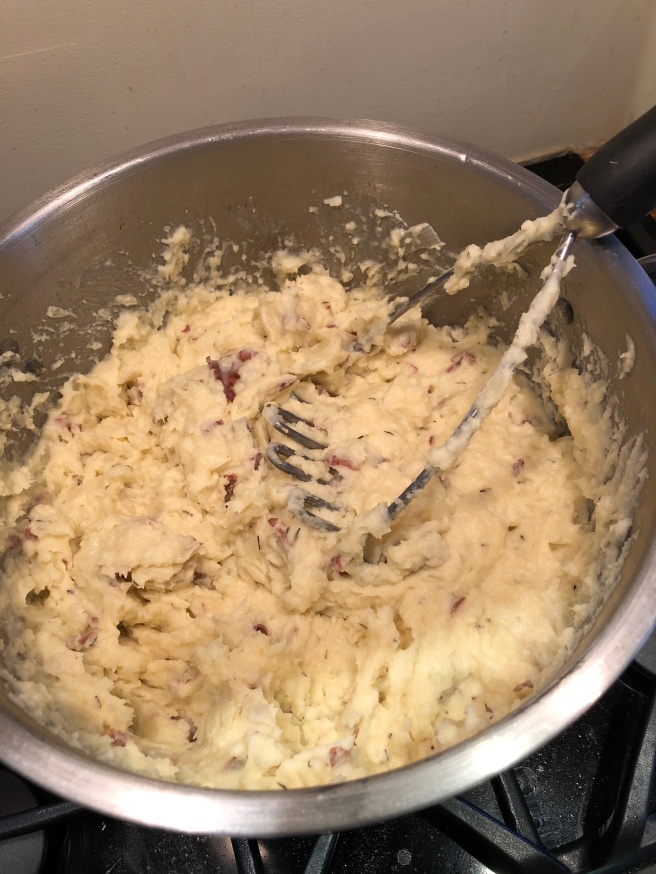 You can serve them this way, or if you like a crust, you can throw them in a casserole pan and bake them in the the oven for 20 minutes. I usually can’t wait that long.

View all posts by jeffsternberg